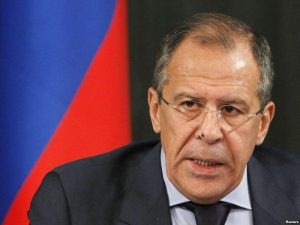 Russia foreign minister considered Afghanistan’s current status worrisome and warned that if there shouldn’t be anything done to pull out from this condition, this country will face Syria’s fate.
According to (DID) press agency report, Russia’s foreign minister, Sergey Lavrove has warned about the continues current crisis in Afghanistan, in a visit with Salahuddin Rabbani in Moscow.
Lavrove, described the increase of scaremongering and war range expansion worrisome and demanded to take a specific strategy to fight the terrorism.
Russia foreign minister has also expressed: in order that Afghanistan not to experience Syria’s status, in the first step, there should be some agreements between Russia and America.
In the meantime, Salahuddin Rabbani, country’s foreign minister expressed optimism about the extension of political, military, economic and business cooperation, too.
Mr. Rabbani with a mention to current crisis of Afghanistan said: some countries back scaremongering in Afghanistan.
It is said that soon, a meeting will be hold on Afghanistan peace issue in Moscow, too.

Time of Parliamentary elections and district councils to be Determined today