The 11th martyrdom anniversary of the Afghan people’s representatives, headed by martyr Sayed Mustafa Kazemi, was celebrated on Friday 9 Nov. 2018, attended by politicians, political parties, members of the parliament, university professors and hundreds of Kabul residents in the Loya Jirga Hall. 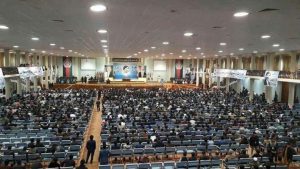 The 11th martyrdom anniversary of the Afghan people’s representatives, headed by martyr Sayed Mustafa Kazemi, was celebrated on Friday 9 Nov. 2018, attended by politicians, political parties, members of the parliament, university professors and hundreds of Kabul residents in the Loya Jirga Hall.
Addressing the participants, former VP Mohammad Yunus Qanuni said: “martyr Kazemi was a talented young man and one of the exceptional cadres of Afghanistan.” 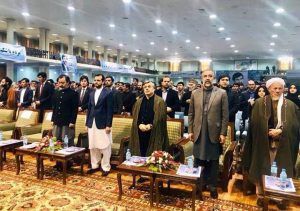 “Shahid Kazemi was a pioneer in jihad testimony and defense of the country against terrorism. In the aftermath of the Taliban, he also carried out his elite management role for the country,” he added. “every time, we got into trouble at the parliament, we looked at Mr. Kazemi’s innocent face, because he always presented advice, plans, and solutions.”
Speaking about the Moscow peace summit, Qanuni said: “peace plan without the presence of resistance realm is not acceptable under any name.” 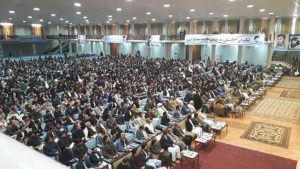 “peace talks, the Moscow summit is the beginning of partitioning Afghanistan, and we do not want the armed island of power in the country,” Qanuni continued, saying that we do not want an engineered peace process. “If the islands of power are formed in the country, it will be very dangerous for the future of Afghanistan,” he added.
Talking about the parliamentary election, Mr Qanuni said: “The elections held with shortcomings and we hope that the results of the votes will be announced in accordance with the votes of the people.”

The second deputy to the Executive Directorate Mohammad Mohaqiq said: “the government ignored the Uruzgan and Jaghori houses against the unequal offense of the Taliban and calls it a tribal conflict.”
“when the wave of Daesh (ISIL) attacks against a particular class of citizens began, we gave the government a plan to defend the people and the mosques. The mosque’s security plan was implemented, but the comprehensive plan of the central regions had not yet been implemented.” Mohaqiq added. “If the plan would be implemented and we had 10,000 defensive forces, today people in the central regions would not have been killed this way.”
Criticizing from the International Community about killings of Afghan citizens, he said: “the International Community is indifferent in this regard.”

Speaking about the Moscow summit, Mohaqiq said: “the government has told the Russian part that if the political figures would be invited to the meeting, the national sovereignty will be questioned, while the government itself participated at the meeting through the high peace council.”

Addressing the audience, Dr. Sayed Ali Kazemi, the leader of Eqtedar-e Milli party once again criticized from the government, saying that after 11 years, the hidden sides of the Baghlan tragedy, which resulted in the martyrdom of the representatives, have not yet been clarified.
“I suggest the National Unity Government officials not to convince themselves that the case belongs to the former government. It is not acceptable,” Kazemi said.
Talking about the Moscow summit, Kazemi said this meeting is a good step forward and we welcome it.

Mohammad Alam Izadyar, the Senate Deputy Speaker, said: “martyr Sayed Mustafa Kazemi was one of the elite politicians of the country, and his absence is considered a huge disaster for the country and the people.”
Speaking about the Moscow peace summit, he said: “we hope Moscow summit be the beginning of a dialogue to bring peace to the country.”
Criticizing the government, he added: “the government has not had the courage to attend Moscow summit in order to raise the people’s demands.”
“terrorists are the enemy of the Afghan citizens and they know no ethnic group and sect; because this phenomenon has taken victim from all ethnic groups of the country in the past 17 years.”

Ahmad Saeedi, a political analyst, said: “Kazemi thought about the country and its pains.”
“politics in Afghanistan, unfortunately, is seasonal and does not reflect the national interests. Afghanistan is like a chessboard that anyone today plays on it,” he added.
About Moscow summit, he said: “Moscow summit has given a higher position than the government to terrorists.”
Martyr Sayed Mustafa Kazemi, former minister of parliament’s national commerce in the Afghan Transitional Government, was amongst a delegation of politicians and lawmakers assassinated in a suicide bomb attack in Baghlan, northern Afghanistan, on November 6, 2007. 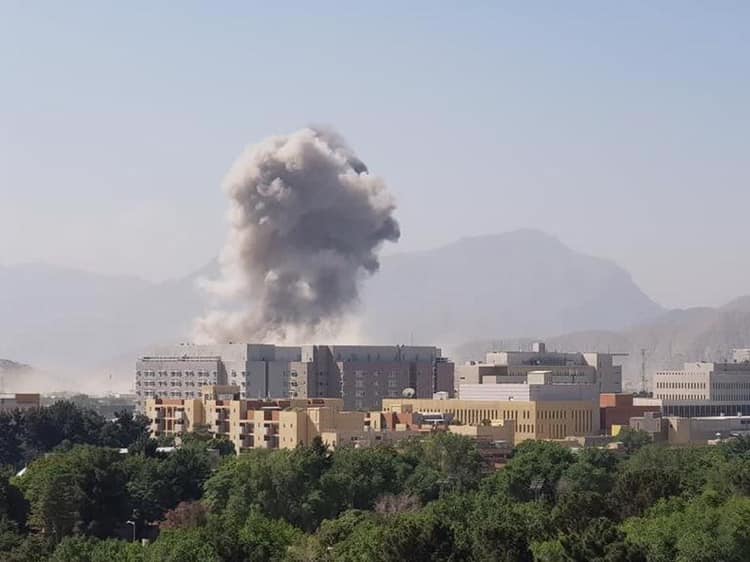 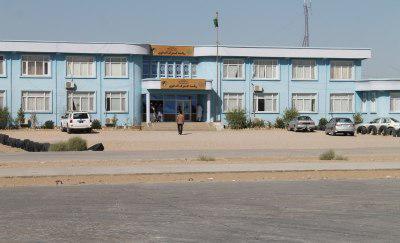